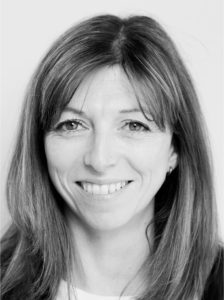 Dr Hilary Kenna is a designer, lecturer and researcher. She is Head of Department of Technology and Psychology at IADT, Ireland’s leading third level institute for the creative, cultural and technological sectors, where she has taught design for screen media on the Visual Communication Design programme for over a decade. Hilary specialises in visual, UX and information design, data visualization and design thinking, with international successes in commercialisation research projects. Hilary is an international speaker on her published research work.

Previously, Hilary was Principal Investigator of a data visualization and business intelligence research project, Vizi, which won the Irish Software Association (ISA) award for Best Industry and Academic Research Collaboration.
Another of Hilary’s ventures, SeeSearch – a search and discovery product was granted two US design patents in 2015.

Hilary completed her PhD in Design Principles for Screen Typography at the University of the Arts (UAL). She designed the multiple award-winning poetry iPad App, The Waste Land by T.S. Eliot for publishers Faber & Faber and Touch Press UK, which was the subject of her TedX talk, Screen Typography – Words made Usable. The Waste Land was App of the Week in the US and UK Apple stores and gained over 100 positive reviews in the international press including an editorial in the New York Times.

Hilary was previously consultant Head of Design and UX at Independent News & Media, Ireland where she re-designed www.independent.ie, Ireland’s largest online newspaper. Within two months of its launch, traffic to the independent.ie increased from 7 to 9.5 million page impressions per month and sustained continued growth since. Hilary has previously worked for the international games and education publisher Vivendi. She continues to work as a freelance designer/creative director and UX consultant.